A pasture is used to raise livestock. Pastures vary in size. You can place large and small pastures, however large pastures can hold more animals. Pastures need herdsmen to care for the animals and slaughter them for meat. 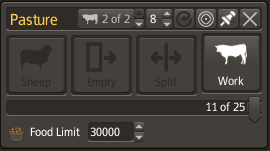 After a pasture is placed you can view the number of animals in it by clicking on the pasture.

After slaughtering an animal, or after animals produce other resources, the workers will return the meat and goods to the nearest storage barn.

Before you can raise animals in a pasture, you have to select an animal type to place in the area. if the town doesn't have any livestock, they can be acquired by buying them at a trading post. Once there are a few animals in the pasture, they will reproduce and fill the pasture over time. You can only change the animal type of a pasture when it is empty.

In order to increase the number of animals a town has, a herd can be split in two. Once a pasture has enough animals in it, and if there is room in other pastures for the animals, you can press the split button. This will move half the animals into other pastures. Over time, the animals will then reproduce to fill the pasture.

You can enable and disable work at the pasture by pressing the work button. If the pasture is disabled or the pasture doesn't have workers, the animals won't be as healthy and won't reproduce as quickly.

The Food Limit control sets the food resource limit. Once the limit is reached, no more food will be produced.